Posted on August 13, 2014 by morphemicmorphology 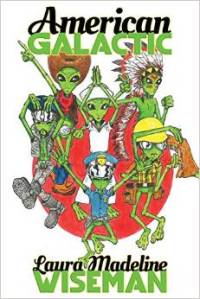 “I do what any normal type person might do.

I take the limp hands and pull the Martians inside.”

Laura Madeline Wiseman’s sophomore sci-fi poetry venture “American Galactic” begins with an effervescent pop of inter-stellar whorls of delectable reveries spun along the lines of an exquisite fantasia. The collection begins sonorously enough, the gleaning of meaning perched above a precarious point atop a proverbial precipice, a mesmeric revelation that gradually unravels and bears the reader away on a contemplative, cosmic wave of inter-planetary peregrinations.

The slender, lithe, green-limbed Martians tumble efficaciously, out of closets along with adorned and unadorned human skeletons and the march towards reclaiming more than fleeting subliminal validation of their existence is a long, excoriating, exasperating one. The poet writes in an easy, free-flowing, deft, artistic style which showcases vibrant flair tempered with a sympathetic understanding which constitutes a syncretic, mellow, unapologetic, slightly strident, vivacious attempt at captivating the reader’s attention.

The poet portrays the Martians with a tantalizingly vivid stroke of the pen and renders them humane in their very minute characteristics, their inveterate idiosyncrasies and multiple mannerisms. Poems like “A Star”, “Eye for an Eye”, “Misnomer”, “Abduction Dream”, “Green Thumbs” and “Martian Fantasy” jolt the reader upright by sheer dint of the overwhelming impression of novelty and myth making. The poet succeeds in conflating and deflating myths simultaneously in the collection and the overall thematic and structural unity pronouncedly prevalent in the poems pierces through the swarthy aureole of virulent obfuscation skirted and churned up while addressing the existence of extra-terrestrials.

The crowning achievement of the collection is undoubtedly the magnum opus, “Hands like Drowned Stars: Martian Dream” and the seven part structure, gradually unfolding and tapering to a momentous realization veers towards the perfect climactic moment of oracular import. Each of the miniature pieces stringing together this poem sets the lilting mood for the artistic consummation that is to occur in the next poem, “Close Encounters of the Third Kind”, which ends the collection on a rather blissful, prodigious high, where the reader is inclined to believe that there indeed was “one brief cinematic moment” when “we all glowed” and bowed our heads in fervent prostration to the giant strides taken by the poet towards blisteringly honest and eminently sustainable verisimilitude despite the obvious inventiveness of theme and subject matter.

American Galactic has crossed the inimical threshold of veiled hostility, invariably drawn by unflinching schools of pedantic purists for auto-generic compendiums of fantasy. There is a pervasive tone of sublimated vehemence in the various poems which piece together the collection. An ornate, lush dexterity is vociferously evident in the joyously alive vocabulary and the technique vivified by the poet in the mellifluous, cadenced verses. She has successfully peeled back the onion layers of trepidation and speculation, her delightful contextual and poetic vivisection bringing alive the solitary throb, the rush of blood, the suffused aura, the exhilaration and terror of life itself through the impassioned and heartwarming portrayal of the Martians as familiar unknowns. The mesmerizing delicacy of her verses and the scintillating craftsmanship is further amplified by her perceptive sensitivity and intelligent insight into a hitherto unknown, untrodden, unexplored kaleidoscopic hinterland of spectacular possibility.

Laura Madeline Wiseman’s “American Galactic” is a book that charmingly evokes the involute intricacies of its subject matter, with uninhibited grace and delicacy and the textual tenderness in terms of treatment of theme and execution of posited ideas is what makes it a delightful collection of verse that has monumental retentive value for the enchanted reader. It is book that needed to be written. And Laura Madeline Wiseman has done it again.